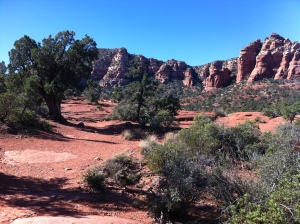 Hiking with Benny has been a little more difficult today. I’m going to say it’s because Benny is so attuned to the energy around him and the up flow of energy at the vortices got him all riled up. He barked and lunged and showed his Elvis face to nearly everyone we saw today. It was very stressful for me.

We went to the Bell Rock vortex this morning. It was already hot at 10 am when we got there. The trail was rockier than Benny prefers, which slowed us down a lot. We stopped to pee a lot, as always, but we also just stopped because Benny wouldn’t go.

This provided lots of opportunities for people to approach, and then for Benny to bark!

Actually, most people understood and just stepped backed when he launched. They would tell me they had a little dog at home and know what they’re like. And this was comforting for me. But other people were really clueless and it shocked or scared them when Benny barked. I felt bad about it. I felt like a bad dog owner. But I can’t help it he acts this way!

I’m not gonna lie and tell you I didn’t think for a few minutes that bringing him with me on this trip was a big mistake.

Truthfully, though, it’s been pretty nice having him with me most of the time. He’s always a little antsy in the car when we first get going, but he settles down once we hit some speed and then just sleeps until we get out somewhere. It’s been sweet to have him with me in the hotel rooms at night. He’s learning the new routine. And I can tell he tries not to bark when we are getting ready to leave the room.

So, tomorrow, we will try to hike again. No more vortexes, though! Hopefully I’m right about his intuitive nature and he will be magically good again!